You are viewing an excellent bi-metal Royal Scots Greys cap badge, it is officer grade, most likely of WWII vintage, may be silver plated. Showing clear evidence of age patina as well as polish residue, this badge has the expected "tang" type fastener, original and in good order. Although made using the stamping method, this badge still is quite weighty. The name on the scrolling id the "Royal Scots Greys", which dates from 1921, making me think it is from an earlier historical era.

We also accept PayPal; click the link above. You must assume responsibility for loss in shipping if you decline our tracking / insurance offer.

We will happily combine items to save shipping costs if you purchase other items as well...

On all our products we accept prepaid authorized returns within 14 days of shipping, for full product credit, if you are not pleased. 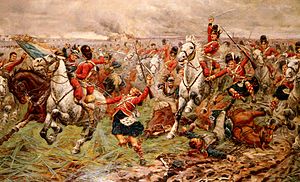 The Eagle of the French 45th Ligne captured by the Royal Scots Greys. Painting by Stanley Berkeley depicting the famous charge of the Scots Greys at Waterloo. The kilted figures carrying muskets are the 92nd Highlanders. According to legend, the men of the 92nd hung on to the stirrups of the Scots Greys during the charge. Although both regiments record it as part of their history, independent eyewitness accounts do not confirm the truth of the "stirrup charge".
The Royal Scots Greys regimental history began in the year 1678. Three independent units of Scots Dragoons were raised. Three years later, in 1681, these 3 troops were formed into The Royal Regiment of Scots Dragoons, and given the number 4th Dragoons in 1694. Their grey mounts had already become famous by this stage and the regiment was already being referred to as the "Grey Dragoons". In 1707, they were renamed The Royal North British Dragoons ("North Britain" was then the new name for Scotland), but, already, they were being familiarly called the "Scots Greys". Remaining loyal to the Anglo-German king, the Scots Greys were active in putting down the uprising. In 1713, they were renumbered the 2nd Dragoons as part of a deal between the English Army and Scottish Army during that early unification of the Scottish and British Armies. Also, during the first Jacobite uprising, they were known for a while as "Portmore's Dragoons". Their ill fated charge against the French guns at Waterloo in 1814 will forever live in the regiment's history. (see picture above) In 1877, the "Scots Greys" nickname was finally made official and they became the 2nd Dragoons (Royal Scots Greys), which was inverted in 1921 to The Royal Scots Greys (2nd Dragoons). They kept this title until 2 July 1971, when they amalgamated with the 3rd Carabiniers, forming the Royal Scots Dragoon Guards.

Shortly after the beginning of WWII, the Scots Greys were the last Regiment of the British Army to use horses on active service. A final review of the Scots Greys as a cavalry regiment occurred at Nablus in the Palestine mandate once the campaign in Syria and Lebanon was complete. Soon after this final review, the horses were traded in and then they who had spent their lives as dragoons were retrained to act as drivers, loaders, and gunners for tanks. Now designated as an armoured regiment, they received their first tanks in September 1941. Initially, the Scots Greys trained on the Stuart tank. Later the Scots Greys were transferred to the Eighth Army. Once in Egypt, their new Stuart tanks were immediately withdrawn and the regiment spent time near Cairo learning to operate the American made Grant tank. In 1943 the Royal Scots Greys were re-equipped as an all-Sherman regiment, with more American made Sherman II tanks just in time to participate in the Sicilian campaign, but they did not see action until the Salerno landings. 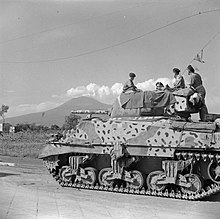 On 7 June 1944, the first three tanks of the regiment landed on Juno Beach. As part of the Battle of Caen, the Scots Greys took part in the fighting for Hill 112. During the fighting for Hill 112 they soon saw how under-guned these new Shermans were against the heavy new German Panzer tanks. In one incident, a 75mm equipped Sherman of the Scots Greys hit a Panther at 800 yards four times. All four rounds impacted harmlessly on the Panther's frontal armour. That September, the Scots Greys took part in the Operation Market-Garden, fighting around Eindhoven where the 101st Airborne landed to capture the bridges. They continued on the Lowland region of the continent until the end of the war. In 1969, the Scots Greys returned home to Scotland for the last time as an independent unit. As part of the reductions started in 1957, the Royal Scots Greys were scheduled to be amalgamated with the 3rd Carabiniers (Prince of Wales's Dragoon Guards). The amalgamation took place on the 2nd of July 1971. The new unit was christened The Royal Scots Dragoon Guards (Carabiniers and Greys)

We also accept PayPal; click the link above. You must assume responsibility for loss in shipping if you decline our tracking / insurance offer.

We will happily combine items to save shipping costs if you purchase other items as well...

On all our products we accept prepaid authorized returns within 14 days of shipping, for full product credit, if you are not pleased.

WWI era Canadian Corps of Signals Shoulder Title - $39.00
complete with all original lugs.
Check it Out